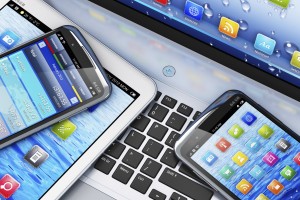 The first commercially available desktop computer was available in 1974, this was the Altair 800. This pioneer computer wasn’t much to behold, but at the time it was revolutionary. With toggle switches, LED lights and only 1K of memory, the Altair 8800 opened the doors to thousands of possibilities. In the mid- 70s RadioShack introduced the Tandy computer which had a more user friendly approach and was an instant success. RadioShack went on to be the first real player in the computer game and the Tandy’s keyboard and CRT monitor it was easy to see why.

At the time RadioShack and the Tandy were creating a buzz, Steve Wozniak and Steve Jobs were working on the next big thing. The Apple computer they created was followed by the Apple Two with similar features as the Tandy but one – a color monitor. Competition was stirring and by the late 70s the Arti 400, TI-99, and the VIC-20 were soon hitting the shelves. Commodore (maker of the VIC-20) went on to make one of the bestselling computers of all time with their Commodore 64.

The next big thing in computers would not come about until IBM entered the playing field with their IBM PC in 1981. This was the first computer to feature the Microsoft MS-DOS operating system which became the standard. By the late 1980s Apple Computers was the only company that was not running on the MS-DOS operating system. Apple was pioneering at this time the GUI (graphical user interface), a more interactive approach to handling a computer.

Since then, the rate at which personal computers have expanded into our offices, homes and laps has accelerated. To say we have come a long way from blinking LED lights and basic keyboards is an understatement. Today we have thinner, lighter, and sleeker desktops, laptops, and tablets due to decades of technological advances. Pioneers in the computer and operational systems industries are always attempting to discover and create the next big breakthrough in computer technology and user experience. There is now an entire generation of people who have had access to a computer their whole life and that, in the minds of many, only scratches the surface of what is possible.

For questions or information regarding IT Services, contact Up & Running Computer Solutions in Corona, CA at 951-737-8558 or visit our website at www.urcs.net.